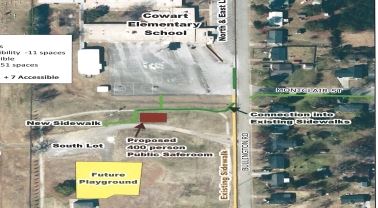 The City of Athens, Athens City Board of Education and emergency officials are collaborating to construct the city’s first public safe room.

FEMA has approved funding and plans for a safe room at Cowart Elementary in western Athens. This safe room is the result of hazardous mitigation money allocated through Limestone County EMA after the 2014 tornado disaster. FEMA is funding $410,460 and the City of Athens and Athens City Board of Education are funding the local match of $136,820. The site will be to the south of Cowart Elementary on campus grounds.

The next step is to prepare bid requests for the project.

Once constructed, the safe room will be available to the students/ staff at Cowart Elementary, which also houses Spark Academy, and open to the public during non-school hours. It will have an occupancy load of 442 people.

The safe room will have similar guidelines as the county safe rooms, such as no animals allowed except for service animals. There will be designated points of contact to open the safe room as needed. This location is within close distance of residential properties, a small trailer park and apartments.

At the June 26, Athens City Council meeting, the council approved hiring Lee Helms Associates to oversee aspects of the project including obtaining permits, reviewing pay requests, conducting site visits to ensure the scope of work is being accomplished, conducting quarterly meetings and preparing reports for Alabama Emergency Management Agency, and other needs. Lee Helms Associates has worked with Limestone County EMA on the safe rooms constructed in Limestone County.

Supt. Trey Holladay of Athens City Schools said, “Keeping our students safe during the school day is our number one priority. Having a safe place to take shelter during severe weather will ease the minds of all our parents, teachers and students. Additionally, this will be a valuable resource to our community.”

The school system is providing the land as part of its local match. Athens Mayor Ronnie Marks said City of Athens crews will provide labor where possible for part of the city’s local match.

“This project demonstrates what can be accomplished when organizations work together for the greater good of this community,” Holladay said.