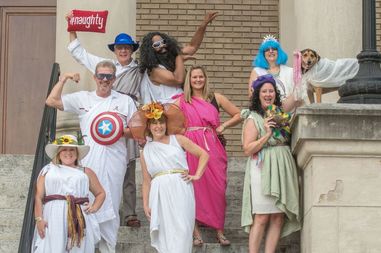 Athens Main Street is seeking nominations for the 2017 Athena-Grease Goddess for the upcoming Athens Grease Festival.

The mythical Athena was known as a wise Greek goddess who loved and protected the City of Athens, could be a warrior and had a creative side and interest in the arts, crafts, and agriculture. Likewise, the Athena–Grease Goddess should demonstrate similar qualities through her willingness to give back to the city. She must be a Limestone County resident who works to improve the City of Athens through avenues such as volunteering with non-profits, with the arts, with youth, on a city board, or through environmental efforts. She can earn extra points for being known as a good cook.

Athena-Grease Goddess will lead the opening ceremonies for the festival and have a throne of honor on the courthouse steps where she can watch the festivities and meet with event goers.

Nominations are due by Aug. 21.