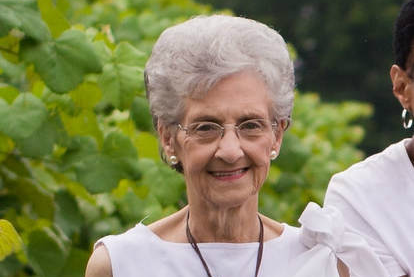 This year’s Athena-Grease Goddess points to the message she once saw on a church marquee as a way to explain why her free time is devoted to helping the community.

The marquee said, “You stand tallest when you stoop to help others.”

“My uncle from New York asked me, ‘Why do you do all this?’” said Martha Jo Leonard. “When I saw that message on the marquee, I called and told him that it summed up the reason why. I just appreciate this town and her people.”

Leonard will serve as the 2017 Athena-Grease Goddess for the Sept. 30 Athens Grease Festival in Downtown Athens. The festival’s top sponsor, Regions Bank, chose Leonard among the Limestone County women nominated for the title.

The mythical Athena was known as a wise Greek goddess who loved and protected the City of Athens, could be a warrior, and had a creative side and interest in the arts, crafts, and agriculture. Likewise, Athena–Grease Goddess demonstrates similar qualities through her willingness to give back to the city. She must be a Limestone County woman who works to improve the city. This could be through volunteering with non-profits, with the arts, with youth, on a city board, or through environmental efforts.

“I am truly thrilled because Martha Jo has been an amazing, tireless and selfless servant to this community for as long as I have known her,” said retired judge Jimmy Woodroof, who serves in Athens Rotary with Leonard.

Woodroof nominated Leonard and attached an additional sheet of information to the nomination form to have space to cover all of Leonard’s volunteer activities. In addition to serving with Athens Rotary, she serves as executive director of the Limestone Area Community Foundation. Leonard’s volunteer interests include March of Dimes, American Red Cross, United Way, Greater Limestone County Chamber of Commerce, Limestone County Foundation for Aging, Athens High School Alumni Association and many others.

“I learned about giving back in school,” Leonard said. “Nancy Martin, my English teacher at Athens High, encouraged me to volunteer. Then I became involved through my job. When I was working at Central Bank, Billy Rich Christopher, whose middle name was “Delegate,” turned to me to assist with whatever endeavor he was supporting, and I enjoyed it.”

Leonard will receive a toga, battery-operated torch and burlap sash so she can lead the opening ceremonies for the Athens Grease Festival, which has been dubbed “One of the Oddest Festivals in Alabama.” Downtown merchant Hendricks-Patton-Rancl will provide a tacky throne upon which Leonard can observe the festivities.

Athens Main Street hosts the Athens Grease Festival that is a celebration of all things fried and the Greek origin of the city’s name. Organizers encourage event goers to eat responsibly the other 364 days of the year.

“Southern cooking is an art form because it is about blending flavors and making a culinary presentation that tempts all the senses from smell to sight to taste,” said Athens Grease Festival Promotions Chair Holly Hollman. “We all have a favorite recipe from our mothers and grandmothers. For me, one of my favorites that my mother makes is chocolate fried pies. I don’t eat them every day, but I sure do relish them occasionally.”

Athena nominees earn extra points for being known as a good cook. Leonard said she is known for cheese wafers and her best fried dish is fried water bread.

“I get asked to make fried water bread on a regular basis,” she said.

To make Leonard’s dish, start with a skillet of hot grease. In a bowl mix ½ cup of self-rising meal with enough water to make it thin. Pour enough mixture into the skillet to have a round pone.

“You cook it until it’s like a potato chip,” she said. “The edges are bubbly, crisp and brown. Then you turn it and mash it with a spatula to flatten it. This recipe makes about five pieces that you can enjoy.”

The festival also encourages quirkiness and not taking yourself too seriously by offering activities like a frozen turkey toss and toga contests for people and pets. The festival serves as Athens Main Street’s largest fundraiser and does have a serious goal, to reinvest proceeds into downtown revitalization. For example, proceeds have funded improved electrical access for vendors and entertainment on The Square.

Volunteers are crucial in achieving missions set by non-profit organizations like Athens Main Street, which is the reason festival organizers created the Athena honor.

“Congratulations to Martha Jo on being selected Athena-Grease Goddess of this year’s Athens Grease Festival,” said Athens Main Street Executive Director Melanie Newton. “My family and I have known Martha Jo and her family for years. I am delighted that she has been chosen and that she is being honored for her love of community and giving spirit. She is an example for all of us to strive to give more and be better stewards of our city and county.”

Joining Leonard for the opening ceremonies will be Athena’s Court, comprised of the other Athena nominees, who were nominated for their volunteer efforts to enhance Athens. Here is a list of court members and snippets of information from their nomination forms:

● Pat King, who recently retired as director of Hospice of Limestone County.
“Pat supports volunteers and ensures they are appreciated. She loves her community. Her smile is infectious”

● Diane Gilbert, a volunteer for the Athens-Limestone Public Library and former court advocate for abuse victims
“Diane has helped re-shelve books, prepare crafts for children’s programs, repair damaged books, and assisted us in numerous other ways big and small.”

● Kristina Hendrix, a member of the Athens-Limestone Community Association
“She works in the community by sharing a depth of knowing in life to the younger citizens of our community. She speaks at various churches and civic groups inspiring children in the community.”

Event goers at the Athens Grease Festival can meet Athena and her court and enjoy a variety of fried foods, music, activities, and a kids zone. Cost is $5 for adults, $3 for children ages 3-12, and free for those 2 and younger. Wear a toga and get $1 off admission. The event is on The Square from 11 a.m. to 7 p.m.

For more information, go to Athens Grease Festival on Facebook or https://athensmainstreet.org/