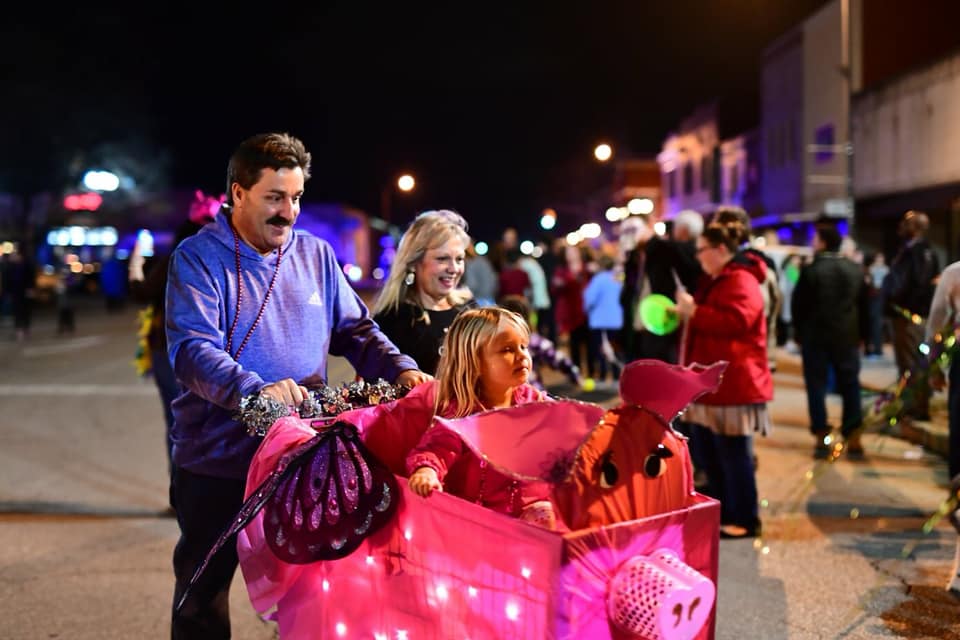 The New Orleans native created a block party where students, dubbed the Athens State University ARTHEADS, created head pieces based on a parade theme and encouraged the community to march, catch and throw beads, and enjoy the Mardi Gras tradition.

The Mardi Gras Block Party and Parade has grown and now includes a collaboration with Athens Arts League. Again, this year, the party includes a parade with a purpose.

“I wanted to include floats, and during an Athens Arts League meeting, we discussed getting shopping carts, which led to inviting the community to come decorate carts, push them in the parade and collect canned food for our food bank,” Bergeron said. “We have the beads, you bring the beans.”

The Mardi Gras Block Party and Parade will be Tuesday, March 5 in Downtown Athens with activities for all ages starting at 5:30 p.m. The parade will begin at 6:30 p.m. Spectators are encouraged to bring canned food to put in the shopping cart floats. (Thanks to Lowe’s.)

The ARTHEADS and Athens Arts League will donate the items collected to the food bank at Limestone County Churches Involved.

“Gail enjoys having fun, and she and her art students have helped establish a free community celebration that grows each year,” Athens Mayor Ronnie Marks said.

In addition to the shopping cart floats, the block party will include a free Mardi Gras mask making craft and wagon decorating at High Cotton Arts, and the Athens State University Center for Lifelong Learning will host a bead-stringing booth. The parade will kick off at 6:30 p.m. in front of the Center with the carts, ARTHEADS, and all family friendly local organizations. All musical groups, walking groups, and individuals are encouraged to participate.

ATHENS, Ala. – Chocolate lovers rejoice! The annual Athens Main Street Chocolate Walk returns to downtown Athens on February 6 from 1 p.m. to 6 p.m. The self-guided event will start at the Athens Main Street office, located at 107 North Jefferson Street, where walkers will pick up their pre-paid ticket(s), a map to participating […]