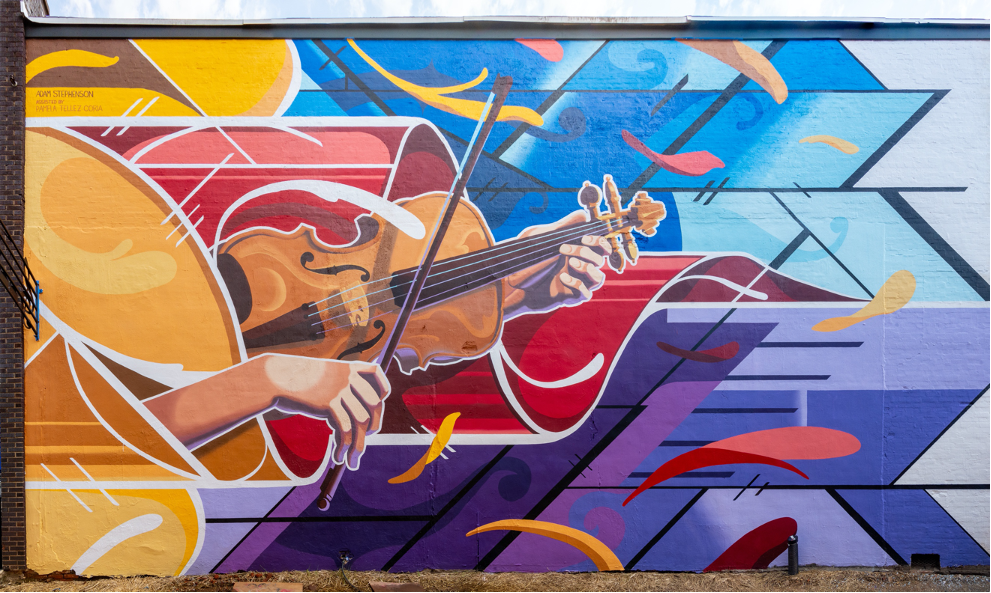 ATHENS – Another major step toward the completion of Athens Main Street’s revitalization of Merchants Alley has been realized.

Artist Adam Stephenson was raised by a musical family and had this to say about the mural.

“My parents fell in love while singing together in a rock band.  My grandparents traveled the US performing in a country band.  My grandfather even has the fortune to host the Grand Ole Opry on a few occasions with Dolly Parton.  I myself am a musician and learned how to play multiple instruments under the guidance of my father.  My father passed away in November of 2020, and this mural is a beautiful opportunity to honor the musical heritage of my family.”

The theme for the alley is “Amplify Athens.”  The series of works of art throughout the alley with music at its core engages in a multitude of ways, exploring the community’s roots in art and music.  The directional flow of the large mural is intentional with the goal of drawing the attention of drivers and pedestrians into the alley where they will encounter, upon completion of the renovation, additional planned art, such as the recently completed Brittany Howard mural, Art Passages, created by students from the Alabama Center for the Arts, and Selfie Murals created by local high school artists.

Adam Stephenson is a multi-disciplinary artist born & raised in the Southeastern United States.

Across several mediums, he dances between themes of exploration, loss, and the indomitable human spirit.  He is best known for his murals and multi-media studio work that weave emotion between the seams of often complex geometric constructions.  Adam began his career in the arts in Atlanta, Georgia in 2001 after leaving his hometown of Decatur, Alabama in search of broader horizons.  He discovered an affinity for exploration and technique through graffiti in the early 2000’s.

Since 2014, Adam has been featured in numerous gallery, street art, and photography group exhibitions in Atlanta, and has recently collaborated with Mexican Chef Graciela Montano in his first international photography exhibition in Mexico City.  As of 2019, Adam has turned his focus towards public arts, receiving the inaugural Public Art Initiative Grant from the Alabama College of Art in Decatur, Alabama.  His work “Homecoming” leaves an impactful monument of his late sister measuring 38’ x 90’ in his hometown.

Athens Main Street (AMS) is a community-based non-profit organization dedicated to the renovation, revitalization, and future growth of the City of Athens downtown area. AMS fulfills its purpose through public/private partnerships with the City of Athens, the Limestone County Commission, and many private organizations, businesses, and individuals.

Look for completion of Merchant Alley in summer 2021!  For more information and opportunities to support this project visit https://athensmainstreet.org/merchants-alley-renovation/.